Earlier this month, we published a detailed article about making gardens wildlife-friendly for kids. We promised to follow up with a post showing a variety of ways for children to make home-made bird feeders — and that is the subject of this article today. We hope toddlers, young children and their parents enjoy making the feeders and seeing all the new feathered visitors that will subsequently come. 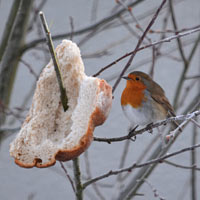 There are hundreds of types of bird in the UK, so if you leave tasty food out for them, a variety are bound to visit. Be patient though, because birds are rightly suspicious of ‘new’ objects, so may take a few days to build up the courage to take a closer look.

Editor’s note: In our garden, we regularly see Robins, Sparrows, Starlings, Blue Tits, Cole Tits, Long-tailed Tits and Great Tits at our bird feeders. Blackbirds, Pigeons and Thrushes also peck at what falls beneath them. However, now that our bird feeders are more established and ‘trusted’ by the birds, we’re seeing Greater Spotted Woodpeckers, Nuthatches and Black Caps regularly too (they’re really cute!) and, occasionally, brightly coloured Bullfinches. 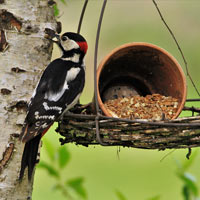 Once they’re convinced that the new feeders are safe, birds will visit regularly if you continue to leave out tasty treats for them and keep your distance, out of sight. You will soon learn which foods are the most popular, so can fine-tune your bird offerings as time goes by. It’s extremely rewarding seeing who will come and which of the birds will become ‘regulars’. We have a pair of Robins (both called Robin!), a blackbird called Norris and a Woodpecker that we call Woody (what else!). Naming regular bird visitors is all part of the fun for kids. Feeding birds is also educational for young children, who will not only get to know the different species, but also grow their appreciation of the outdoors, nature, and our impact on it. Often, an early exposure to nature and some of its wonderful creatures can lead to a life-long appreciation. This can help the creatures living nearby and the mental wellbeing of the children themselves as they develop a deeper appreciation of the natural world. 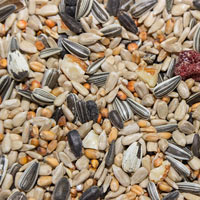 In our last post, we mentioned some commercially-available bird food, but here we’ll take a look at some home-made bird treats that children, parents and guardians can make for the birds at home. They’re pretty quick and easy to make and can often be made from materials and ingredients that are available in the home kitchen. Children may need to ask an adult to buy some seeds, as these are very popular with wild birds. Garden centres and supermarkets usually offer a variety of seeds that are suitable for birds, including different bird seed mixes.

First, a safety note: Children should be supervised by a responsible adult at all times, including around any tools that are required (e.g. scissors and knives) and also around any ingredients that might cause an allergic reaction (e.g. some children may be allergic to nuts).

With a little imagination, lots of things can be made into bird feeders; from empty cartons, used Easter egg boxes (but remove all trace of chocolate as it’s poisonous to birds), empty plastic bottles, the cardboard core from kitchen towel/toilet rolls and so on. Here are just a few ideas, though, that we’ve tried ourselves: 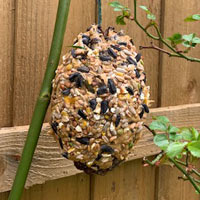 These are quick and easy! Here are the steps to making your own pine cone bird feeder:

A slice of fresh bread, ideally brown or granary bread, can be used in a similar way to the pine cone above. An end crust may work best as it’ll be stronger when held 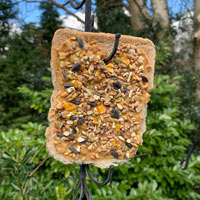 by the piece of string (alternatively garden wire can be used so long as no sharp ends are left protruding otherwise they birds can be caught up in it or become injured). So, the bread needs coating with lard or peanut butter (both sides) and then the seeds need to be pressed into that sticky coating. Once coated, it can be hung outside* using a similar approach to the pine cone feeder above. Simple! If children want to get even more creative, by the way, they can use bagels, with the string being threaded through the hole in the middle. N.B. Never allow bread or other bird foods to become mouldy as the mould is very harmful to birds. 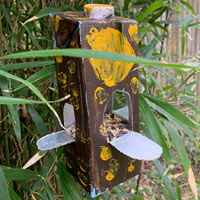 Who would have thought it; a milk or juice carton can be made into an excellent bird feeder! It requires the use of scissors or a knife, so it’s best for this one to be made partly by an adult:

Children can ask a responsible adult for help with this one. There are a few ways apples can be used to feed birds; they can be placed on the ends of twigs, branches or sticks (see image, right), cut into slices and threaded onto hanging string, or made into a fully-fledged ‘feeder’ as outlined below …

If you want to be more creative, you can thread more fruits, grapes or ground nuts (peanuts in their shells) onto the same string and perhaps give them seed coatings too. 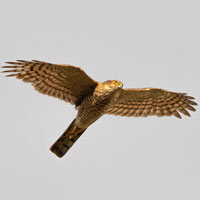 Birds are under pretty much constant fear of attack from predators, so it’s important to locate your bird feeders where birds are safest and most likely to feel secure enough to eat. Therefore bird feeders should be:

Birds will also appreciate some fresh, clean water, by the way. They also love a bird bath. Take a look at our previous post for more information.

Leaps & Bounds Day Nursery is located in Edgbaston, near Birmingham. It’s is a childcare nursery as well as being a Forest School setting. This gives under-fives access to the natural world and to nature in the local Birmingham area and it teaches them so much. We’re keen for children to also enjoy nature – including birds – at home too, so these home-made bird feeder ideas should allow families to enjoy birds, even if they don’t have a garden. Learn more about Forest School in our comprehensive guide. If you are interested in a place for your baby, toddler or under-5 child at a nursery, pre-school or Forest School in Edgbaston, or near to Birmingham, Harborne, Ladywood, Bearwood or Smethwick, call 0121 246 4922, contact us, or book a visit here. We’ll be very happy to hear from you.

Click here to view our 2017 Leaps and Bounds Ofsted report

Leaps & Bounds day nursery is ideally located in Edgbaston and very close to Central Birmingham - B16 0ET ideal for parents who drive to Birmingham for work and those looking for childcare in and around Edgbaston, Harborne, Ladywood, Bearwood, Smethwick.

© 2020 Leaps and Bounds. All Rights Reserved
Scroll to top
We use cookies to ensure that we give you the best experience on our website. If you continue to use this site we will assume that you are happy with it. Find out more.